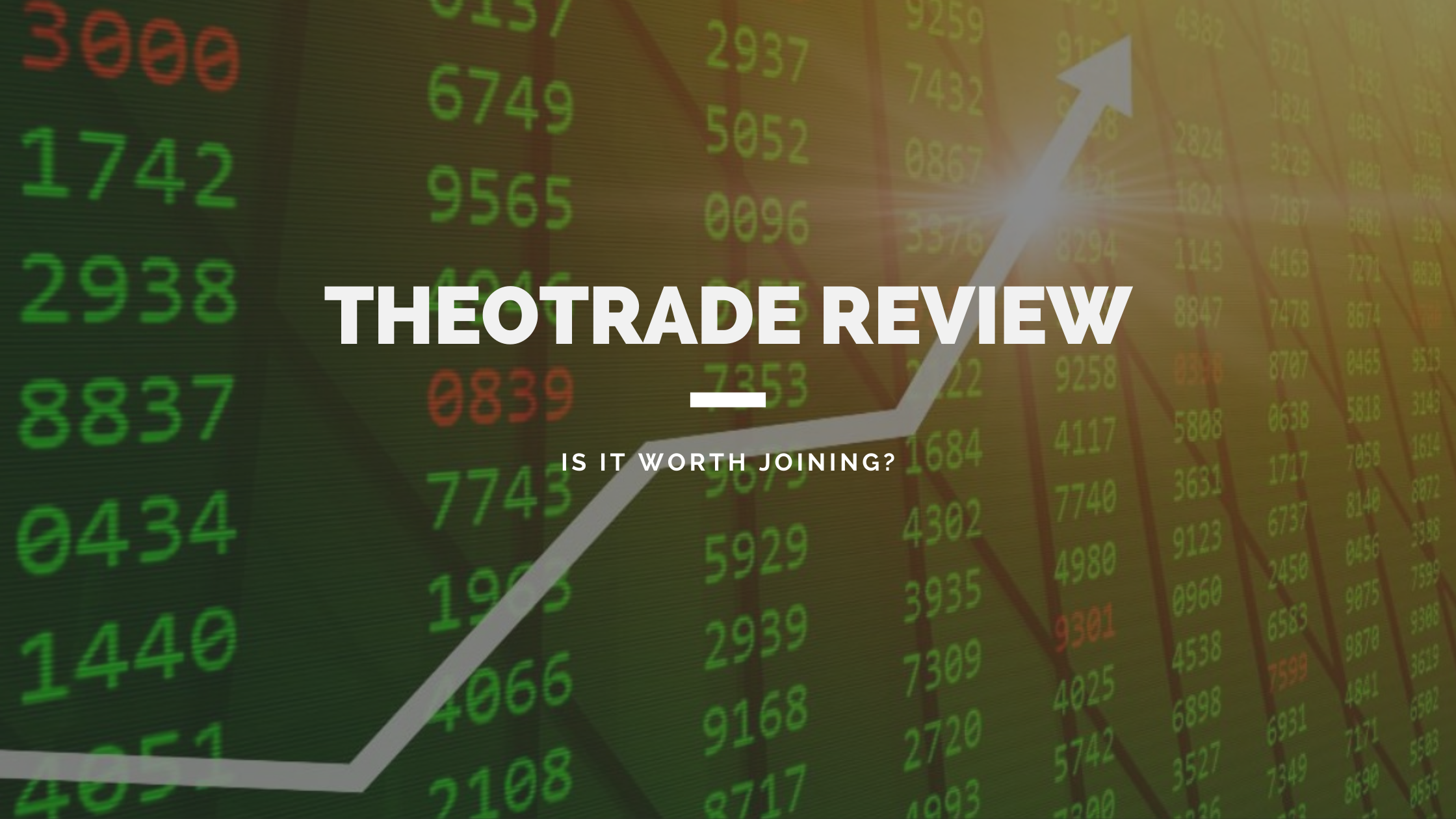 TheoTrade is a company that sells various investing and trading products.. it's run by Don Kaufman.

I bet if you're here you want to know if it's a scam before spending any money.

Well you're in luck..

I spent the entire day going through TheoTrade and wrote this review for you.

You'll see everything there is to know about this program and you'll know if it's worth it by the time you're done.

Let's get into it!

Price: $99 per month for everything

Do I Recommend? Not really

Summary: TheoTrade has courses that are well produced and many of the instructors have experience teaching trading.

However, most of the instructors have no real life trading experience and there's zero track record of success from anyone at TheoTrade.

Because of this I can't recommend you buy their products.

5 Things To Know About TheoTrade

Before we get into what exactly TheoTrade is offering, let's take a look at some background information.

This is what I think is most important to know about this company: 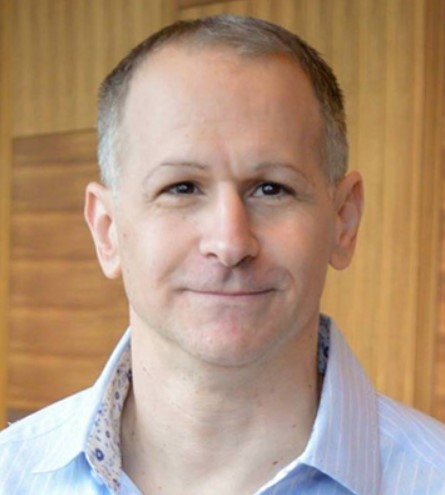 Don Kaufman is the creator of TheoTrade and he has a long history in the trading education space.

Before creating TheoTrade he stared ThinkorSwim.. this is a company that sold trading education programs.

It was eventually bought by TD Ameritrade.

Don then worked at TD Ameritrade for 6 years heading the financial education department.

One thing that seems to be missing from Don's career is actual trading.

I did some digging and discovered Don has a degree from Northern Arizona University.. but not in anything in finance.

Instead he has a degree in molecular genetics (this is actually the second time I've done a review on a trader with a molecular biology degree).

Don earned this degree in 1998 and launched ThinkorSwim in 2000.

You're telling me Don mastered trading enough in two years to start teaching it to others?

2) Jeff Roth Is The Other Co-Founder 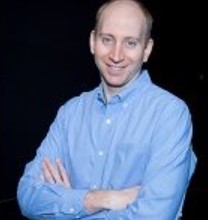 Jeff Roth is the other co-founder and he has the same problem that Don has.. there's really no proof that he's ever been a successful trader.

According to his profile he was been involved with 3 different financial companies but not as a trader.

Instead he was head of growth and revenue.

So he wasn't even the guy teaching the trading.. just the guy who helped grow the companies.

On Jeff's about me page, the following is listed as his specialties: 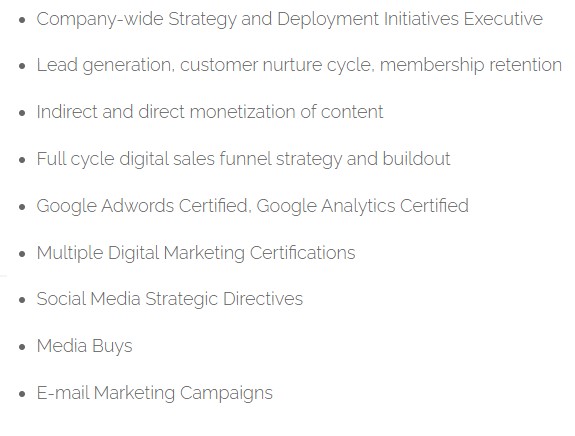 This is all great for Jeff but none of this helps you become a better trader.

It's all things that help TheoTrade make money.

3) Do Any Real Traders Work At TheoTrade?

After growing the bios of the other people working at TheoTrade the same problem keeps popping up.

Not many people at this company actually have real trading resumes or any proof they're successful traders at all.

For example, one of the people that creates training videos for TheoTrade is Corey Rosenbloom.

He claims to have 15 years trading but no details are given where and what that means.

However, it does list his degrees.. which are Psychology and Political Science: 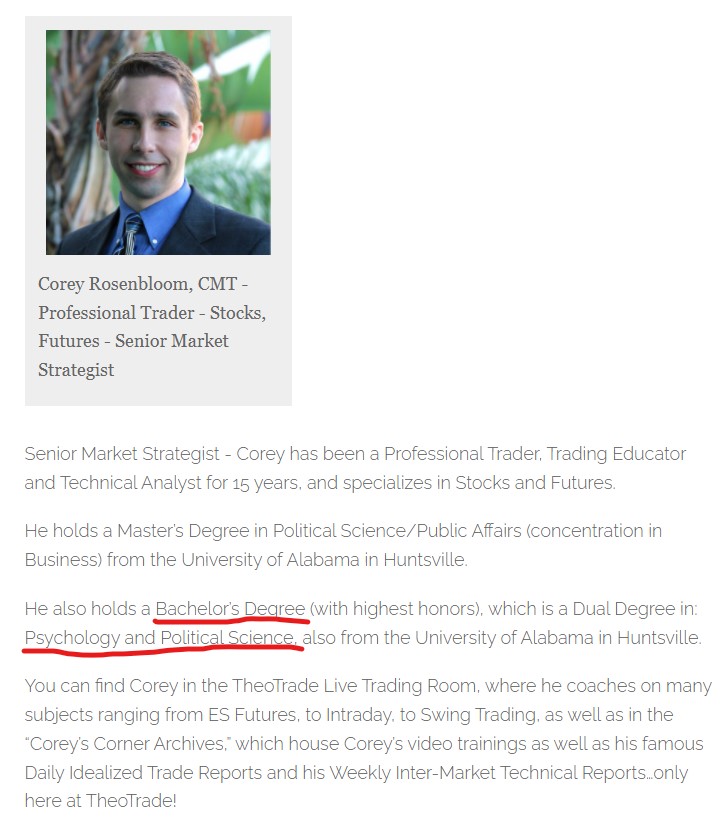 Another instructor is a guy named Matt Williamson.

Again, 15 years trading is alluded to in Matt's bio but no information is given what this means.

It does mention that Matt has a degree in music and used to be a guitar teacher: 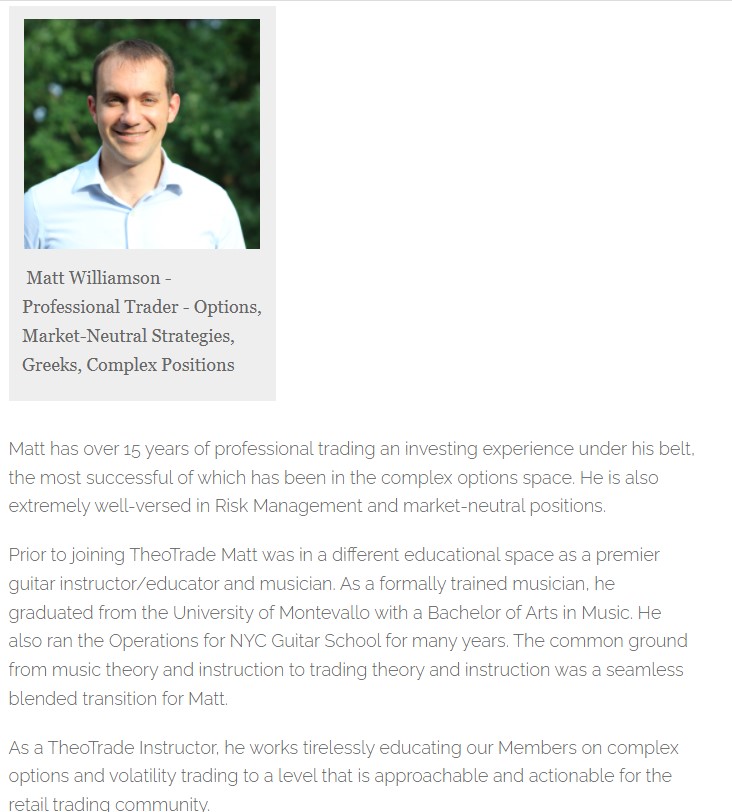 Another instructor is named Brandon Chapman.

He does list some experience that he has and he worked at TD Ameritrade and ThinkorSwim (with Don Kaufman).

But his entire career has been as a coach and instructor, not a trader: 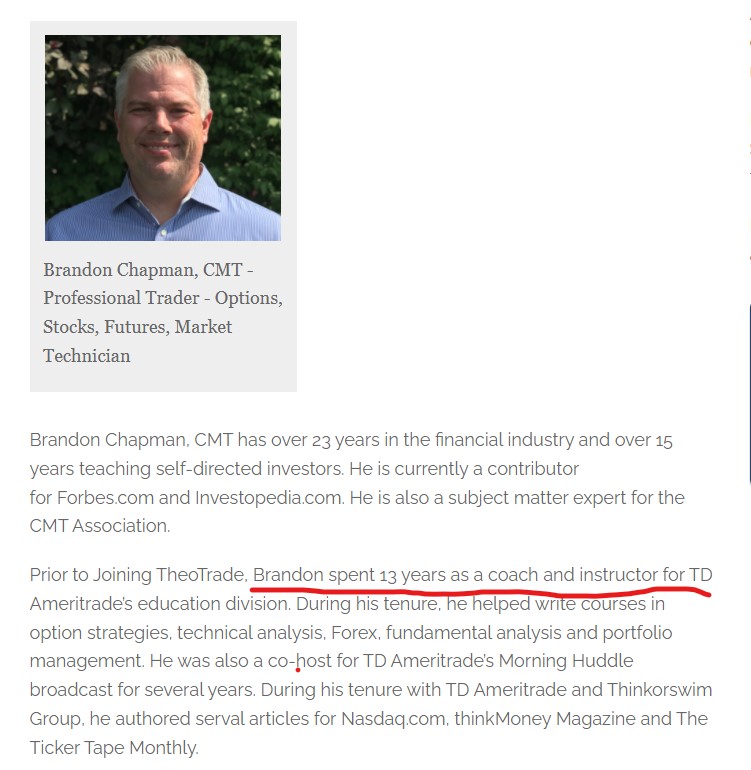 Out of all the coaches and instructors at TheoTrade it only seems like two have actual trading experience, if that.

4) No Proof Of Trades

The financial industry is heavily regulated and many people get in trouble for false advertising.

For example, RagingBull is a notorious company that sold financial education products.. the government recently accused them of being a $137 million dollar scam.

There's two ways to avoid getting in trouble like Raging Bull.

The first is to just be honest about your results and the results your students get. This is the most ethical way to do it but the path least taken for people selling trading products.

The next way to stay out of trouble is to just never mention your trades and returns.

This is the path most take and the path that TheoTrade takes.

You won't find anything on TheoTrade about the returns the instructors get on their trades.

Even if you read the testimonials you won't see a mention of actual results.. it's just vague positive reviews mentioning how much they like the training.

My guess is the people at TheoTrade aren't actual traders in any real sense and don't make much trading.

If they were they would mention it.

5) Options Are A Big Focus

There's actually training on most aspects of trading at TheoTrade.

However, options seem to be the main focus here.

Options is basically guessing what a stock or asset will cost in the future.

You make a contract around this guess with a date and you have the right to buy the stock at the price you guessed at that date you predicted.

You make money if the price of the stock is higher than your contract price.

This is a legitimate way to make money with the stock market.. I'm just not sure I'd trust the people teaching you options at TheoTrade.

There's a lot of different products for sale at TheoTrade.

It's basically broke up into two categories.

The first is TotalTheo which gives you access to all the training courses.

The second is individual classes you can buy for a one time fee.

Here's a breakdown of both categories.

The training in TotalTheo covers a lot of different topics and there's over 70 mini courses.

You'll learn about the following:

Additionally, you'll get mindset training and training on how to develop a trading plan.

The training isn't just videos either.

You get weekly and daily training with the instructors at TheoTrade.

Topics covered in these streams include:

Additionally, you'll get emails of real life trades that the instructors think are worthwhile.

You also get the option to re-watch past livestreams in the archives.

With your TotalTheo subscription you get access to a real time trading chat room.

Here you can ask questions and get answers from the instructors.

Additionally, you can get to know other members and build relationships with other traders.

TotalTheo gives you the option of getting all courses in one place.

You can also buy the courses individually.

There's way too many courses to cover but they're pretty standard.

TheoTrade offers a bunch of option courses for different skills levels, courses on technical analysis, shorting and much more.

If you want to take a look at everything they offer, click here.

There's a lot to unpack with this program.

Here's what I think about TheoTrade:

We covered this a little earlier but I just want to say it again - I don't think Don Kaufman makes much from trading.

I DEFINITELY don't think he built up his wealth from trading either.

He did it by selling his programs and courses.

Someone online was asking about the course and a person actually had a personal story about Dan and how much he makes:

Don makes so much that his house looks like a resort.

Again, Don never posts his trades or talks about his returns.

There's no track record of him being a successful trader.

However, there's a HUGE track record of him making millions from his businesses in the trading industry.

When you're making this much money from selling courses there's no reason to ever trade a single stock.

The Price Isn't Too Crazy

One thing I do like about TheoTrade is the price for products isn't too bad.

If you want access to everything (which includes 70 courses, live trading room, weekly coaching sessions, trade alerts, etc.) it only costs $99 per month.

This is much better compared to competitors.

In fact, there's a lot of places that only give you one course that cost more.

Many places have chatrooms that cost thousands of dollars every year.

So I do appreciate the people at TheoTrade for keeping things reasonably affordable.

I looked all over TheoTrade and couldn't find anything about a refund policy.

I went to the terms of service and found this:

This is a little confusing and seems like it's only for refund requests because of a price change.

A recent review stated there was a 90 day refund policy but they wouldn't honor it:

Customer Reviews Are Mild At Best

There's a few customer reviews floating around about TheoTrade.

Most are in the range of negative to mildly positive.

This is about as positive as you'll find:

This is the perfect summary of TheoTrade and is exactly what I would expect.

The people at TheoTrade are pros at delivering educational material.. almost all of them come from a financial education background.

So you're going to get good quality videos and the courses are going to be well produced.

However, that's not likely going to translate into success for you.

The person up top followed their trade alerts and didn't make any money - they actually lost money.

You can be good at teaching the fundamentals of trading but if you yourself aren't actually making money with the stock market, you aren't fit to teach.

Unfortunately, I think that describes just about everyone at TheoTrade.

I come across programs like TheoTrade all the time.

All of these places are run by people that I doubt actually make anything significant from trading.

They all sell courses, chatrooms, alerts and more too.

I wouldn't recommend you join any of them and that goes for TheoTrade.

I think it's mostly just entertainment content and stuff like that. I doubt many people become successful traders taking the courses at TheoTrade.

I'd pass on anything TheoTrade is selling. I just don't think their products will help you in any meaningful way.

The good news is there's a lot of programs that will help you make money with stocks.

I've reviewed all the best places that do this..

To see my favorite place to get high return stock ideas (that's affordable), click below: