Christian DeHaemer is out with a new stock presentation.

He claims "we just found the mother lode" and claims he has investment that can go as high as 759%.

Christian is calling these stock ideas the " #1 Play For The Guyana Oil Boom."

I was able to figure out the name of the stocks Christian is teasing based on the clues he left in the presentation.

I reveal them below.

Additionally, I give you a little information on the stocks so you can determine if they're right for you or not.

#1 Play For The Guyana Oil BoomSummary 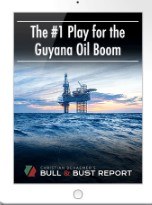 This is a pitch for the significant offshore oil discoveries in Guyana.

It has garnered significant media attention for years.

ExxonMobil's project, on which Hess (HES) is a 30% partner, is the only significant project that has so far been proven to be successful

As a result, among the oil majors, HES is the one with the greatest leverage to Guyana (and as a result, they are priced at a premium, but that seems reasonable given the growth prospects... as long as you don't expect oil prices to collapse).

The riskier ones include Frontera Energy, which is collaborating (with CGX Energy) on what is likely the second-most advanced Guyana exploration project (that JV will be drilling soon, so the news could change quickly).

CGX is the most "pure play" Guyana stock available in the US; they also have an intriguing port project in the nation, but it's small (it doesn't match DeHaemer's clues perfectly, so that one is also the guess o).

ATN International is a specialized "rural telecom" business that develops broadband networks in Alaska and wireless networks in Bermuda and the Cayman Islands.

They also hold 80% of the main telecom operator in Guyana, albeit this little market doesn't matter much to ATNI at the moment.

If you gave me a twist, I'd purchase Hess for Guyana oil exposure.

The other oil explorers, which have a very long track record of losing money (and have historically been "boom and bust" stocks, which occasionally receive coverage in this space), would require a lot more investigation on my part before I felt comfortable investing in them.

But once drilling results are made public, they might be intriguing speculative opportunities.

Figuring Out The Stocks

Alright, Christian DeHaemer is claiming he's got big stock picks and wants to share them with you.. if you buy his newsletter Bull And Bust Report.

Let's see if we can figure out the stocks in the presentation without paying anything.

Here's a breakdown of the stock presentation and my thoughts on everything.

The stock presentation hypes up an oil discovery in a tiny country that's just the size of Idaho and only has a few million citizens.

Christian shares some news clippings talking about this discovery: 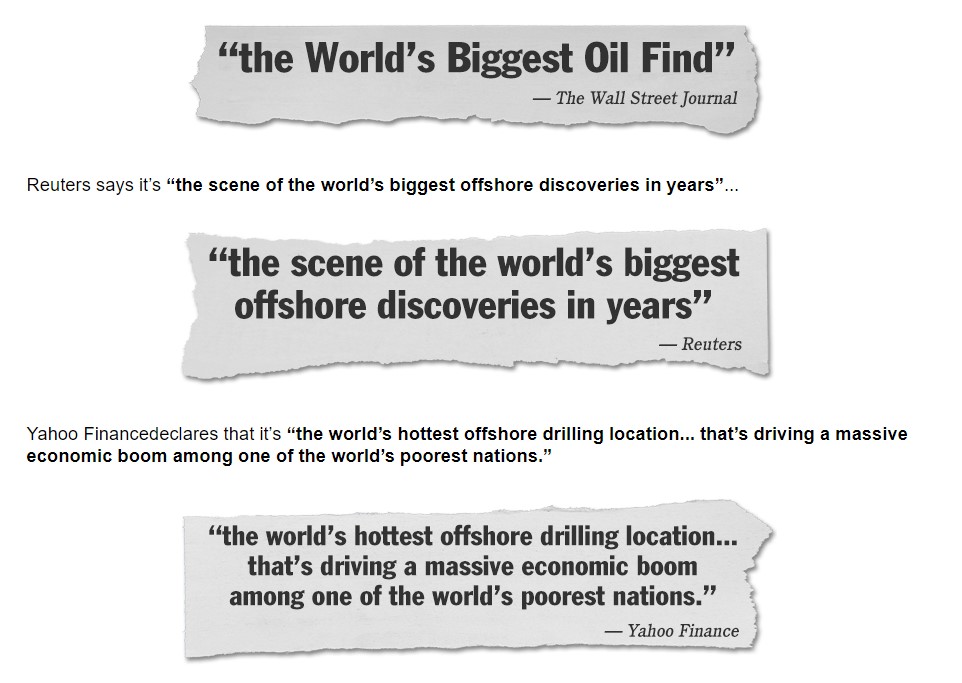 This new oil discovery is supposedly worth nearly a trillion dollars according to Christian.

If you look at the rest of the clues it's clear Christian is talking about the small country of Guyana here.

Guyana is located in South America and one of the least densely populated places on earth.

It spent many years under Dutch and British control until regaining its freedom in the 1960's.

It's currently very poor and 40% of its citizens live under the poverty line.

However, this oil discovery is a very real thing and Guyana is booming now.

In the next decade or so they'll be producing more oil than the US and Mexico and will be the 4th largest offshore producer int he world.

Chris Is Teasing A Small US Company

ExxonMobil is the main oil company in Guyana right now and have many partners in their production.

Chris isn't teasing ExonMobil, though, and is instead hinting at one of their partners.

Here's some hints on the company he's teasing:

The stock Christian is talking about is HESS (HES). 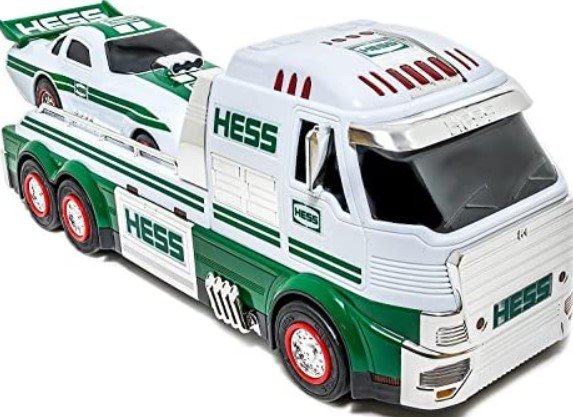 When compared to other major US oil companies, HES is outrageously expensive.

At first glance, it appears to be fairly inexpensive (at 14X earnings), with big earnings growth recently and likely into next year.

That may still be feasible, but it depends more on HES than ExxonMobil's accelerating production from the Stabroek block offshore Guyana.

This is probably a reasonable bet given that production is rising and new discoveries are being made; ExxonMobil stated in a press release a few months ago that they anticipate producing more than a million barrels of oil per day from this block by the end of the decade.

As long as oil demand doesn't decline too much, Hess's claim that this is a big opportunity for them appears to be true.

Given the growth in Guyana and their generally sound financial position, I'd even concede that HES is probably fairly valued, even at nearly twice what their counterparts sell for.

The Stabroek projects will likely appear progressively more attractive in comparison as Guyana auctions off new exploration blocks this year and in the future, if only because Stabroek's tax and royalty system is MUCH cheaper than Guyana will seek from new entrants.

The Next Stock Is CGX Energy And Frontera Energy

Christian starts hyping up we he calls the "#1 small cap rocket. "

Here's what he has to say about it:

Of all the stocks in this presentation this is one the I'm least certain about.. the other ones I'm 100% sure about.

CGX and Frontera Energy (FEC.TO) are both partners in this joint venture, which Reuters reports is "anticipated to be the next consortium to move oil exploration projects in Guyana to the development phase"

They haven't yet found anything nearly as fascinating as ExxonMobil's findings, but it may be an intriguing one.

The fact that CGX is constructing a deepwater port in Guyana for the oil and gas industry is intriguing; it may turn out to be a profitable venture.

It is now valued at roughly $350 million, they are only focused on Guyana, and a lot depends on the outcomes of their next drilling operations.

Whether they will discover anything fascinating or not will be seen.

If you'd prefer a bit more subdued exposure to that, Frontera, their partner, is currently profitable, is around 3X the size of CGX, and has oil and gas projects all throughout South America..

ATN International Is The Last Stock

The last stock Christian is talking about isn't an oil company.

Instead it's a play on the development of Guyana as it goes from a poor country to a rich one.

Christian is hyping a up South American telecom business that is "growing at 55% a year."

The idea is as Guyana develops they will need more telecommunication and things of that nature.

The stock he's talking about is ATN International which owns telecom businesses throughout the US and Caribbean.

Currently, the US company generates about half of the company's revenue and receives some federal grant funding as the government works to increase rural broadband access (they have some sizable projects in Alaska, for instance), and the remaining half is split among all of their international projects, which are primarily in the Caribbean.

Additionally, they are funding the two portions of the business fairly equally.

Small wireless and wireline telecom firms can be rather lucrative cash flow investments, but they frequently don't appear profitable in GAAP accounting, partly as a result of the significant expenditures they need to make to expand their networks.

In ATNI's example, despite not being profitable, the company anticipates "adjusted EBITDA" of at least $165 million for 2022.

Like almost all telecom companies, they do have some debt, but as a result, their enterprise value (net debt plus market cap) is just around $1.1 billion, giving them an EV/EBITDA multiple of roughly 8X.

Although perhaps fair for a small telecom company, that's not exactly cheap.

Who knows, maybe Christian DeHaemer is right and Georgetown, Guyana will become the Dubai of northern South America in 20 years, which would likely be good news for the country.

So that's the end of my article detailing Christian's newest stocks.

They're definitely interesting and Christian sure does know how to tell a good story.

Is this as good as Christian claims?

That's for you to decide.. I've given you all I know about these companies.